Anyone who knows us, knows that we are always changing or moving or altering our garden and even house once it's been a few years since the last one.

We have been really pleased with how the Iris bed worked , having had our best display of bearded Irises ever. So we decided that we'd make the bed bigger , so we could add more Irises that would flower at different times and add more colours. 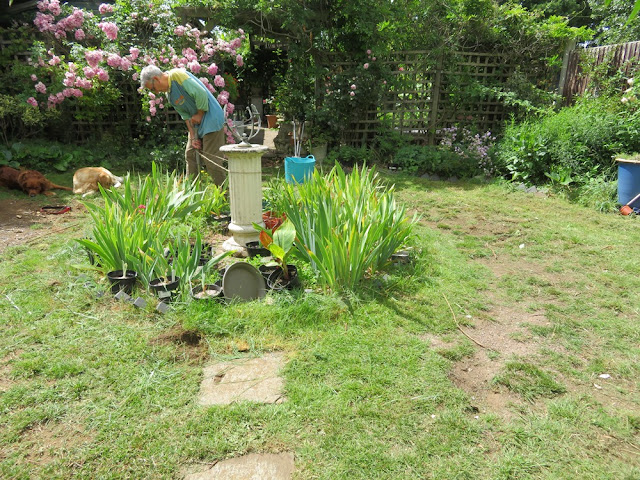 We had ordered some new irises by mailorder when the lockdown was in full swing and they had arrived a few weeks back and Paul had potted them up until we had time to recut the bed. 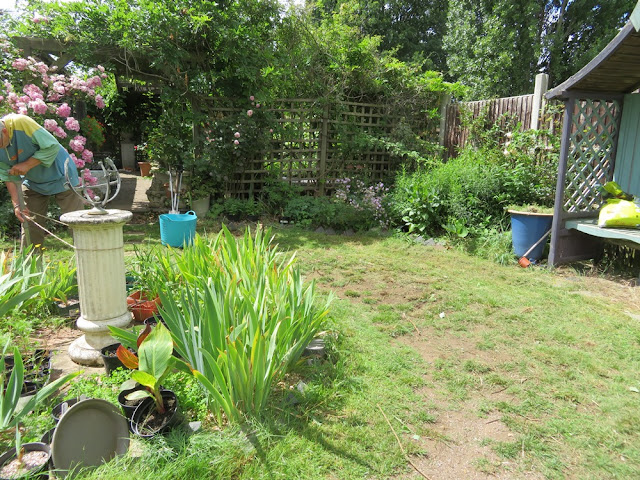 Paul tied string to the sundial column and used that to dig the perfect circle round the outside of the exisiting one. 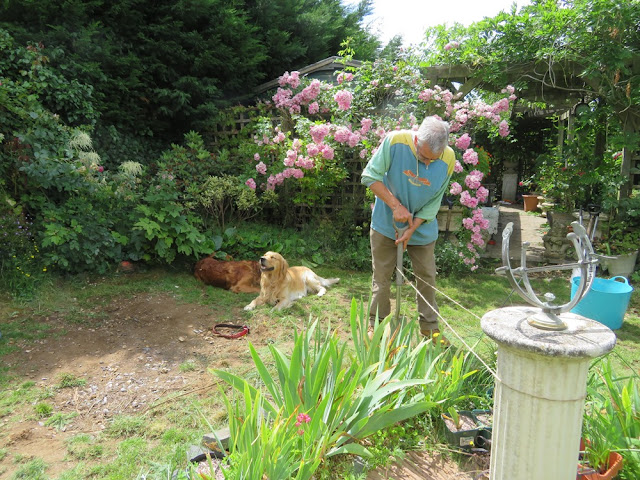 You can see him at work here.

Now we have always wanted to make this garden full to overflowing with flowers and although it's happened in parts . it's not happened in others. 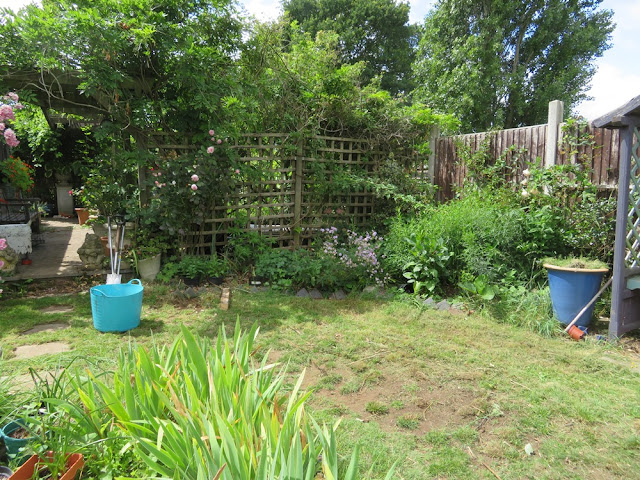 I had always wanted to keep the grass in this part of the garden but with the dogs tearing up great chunks of it ,if they chase each other round the iris bed . I finally decided that it would be easier to do away with the grass. I have wanted to increase the four corner flowerbeds size for a while, so while Paul tackled the circle I started on removing the grass and increasing the flower bed you can see in this photo. 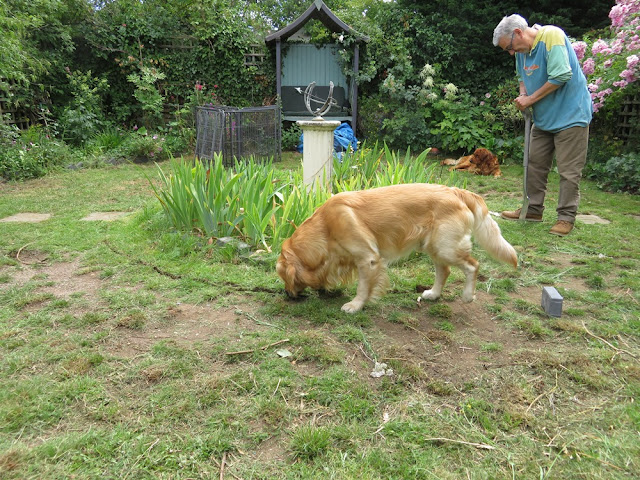 Casper investigates the strange line Paul's dug in the grass! 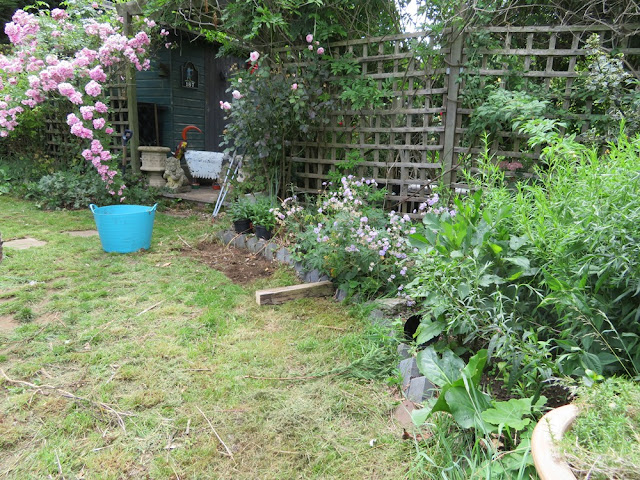 I started removing the grass along the front of the border. 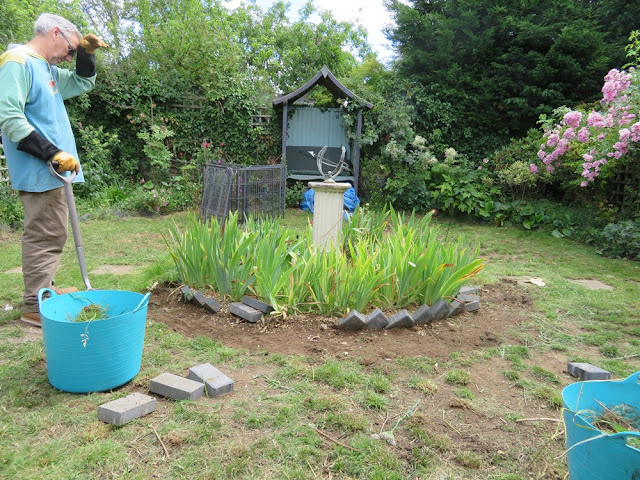 The ground in the centre of the garden was very hard to cut into but Paul soon had the circle cut and the grass taken up. 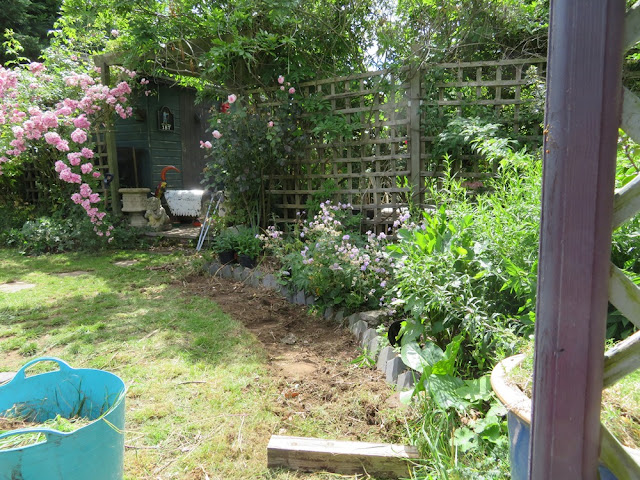 It was slightly easier along the border so soon had a fair bit done. But we'd started very late morning and the sun was getting quite hot despite the cool wind that was gusting about us. So we stopped for  a break and some lunch.

After lunch Paul dug and turned over the new border round the sundial and then went off to the garden centre to get some blood, fish and bone.

While he was gone I repositioned the block pavers around the new border edge, adding a few extra as it was now bigger. 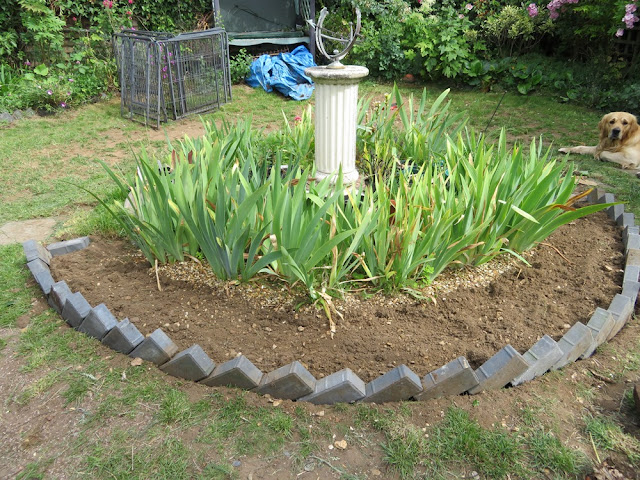 While I waited for him to return , I looked at the size of the extra I had cut out for the flower border and decided it was not enough. 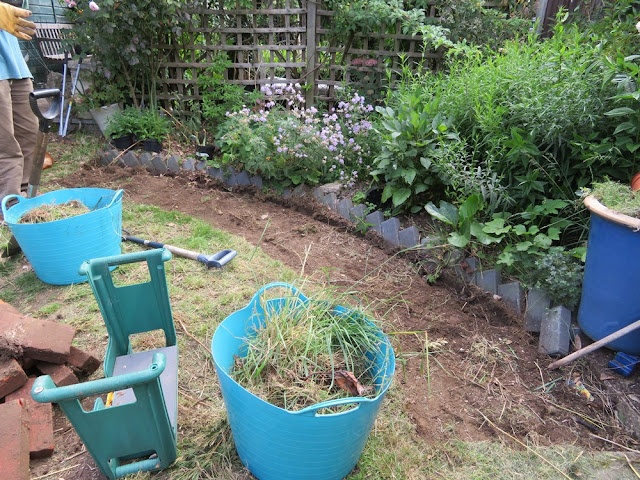 So when Paul returned , we discussed increasing it and he came over to help. 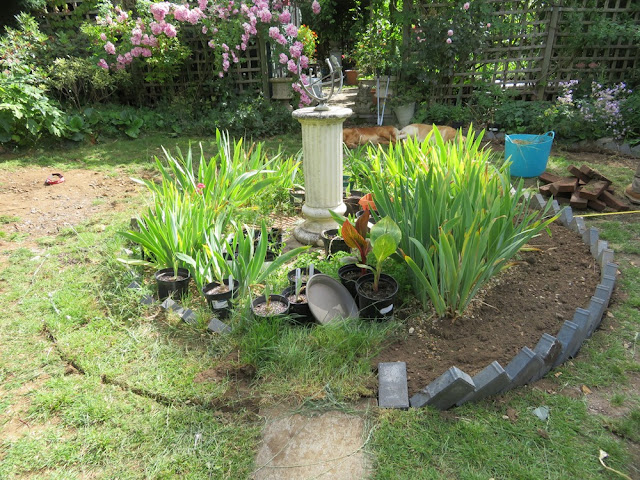 leaving the second half of the circle for later. 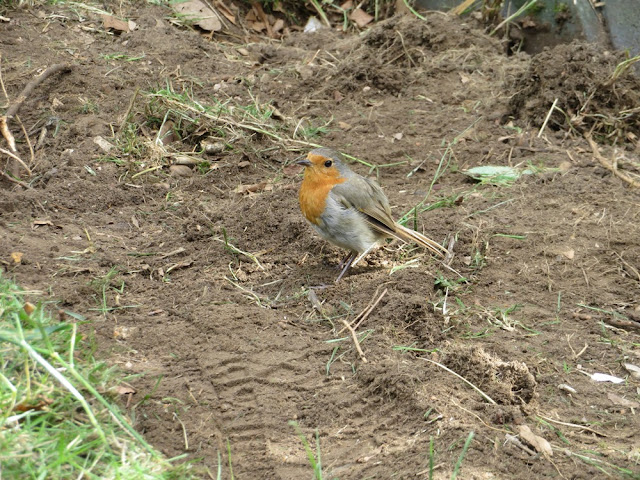 Our Robin friend arrived to pick over the nicely turned soil for any tipbits. 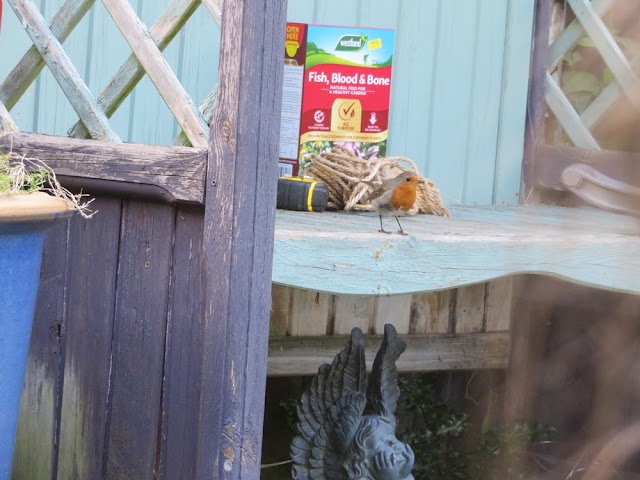 He even stopped for a rest while we dug over more for him ! 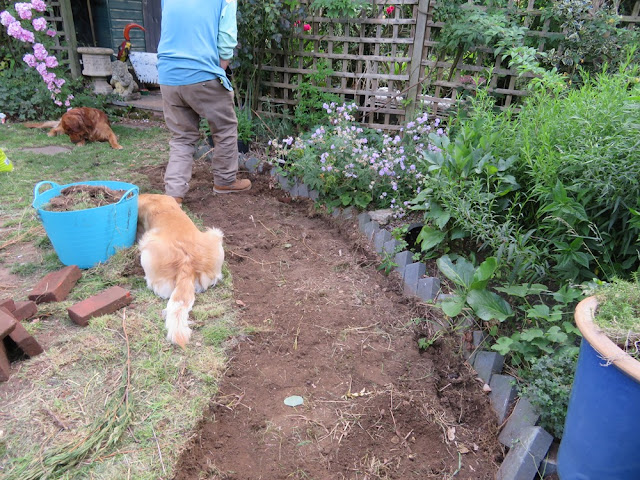 Our garden narrows as it moves away from the house , it is also on a hill, so the garden also drops away from one side to the other! Because of these two factors we realised that we would need to work off the centre circle to have the soon to be paved area the same size all the way round.
This meant the border was widened even more nearer the covered seat. 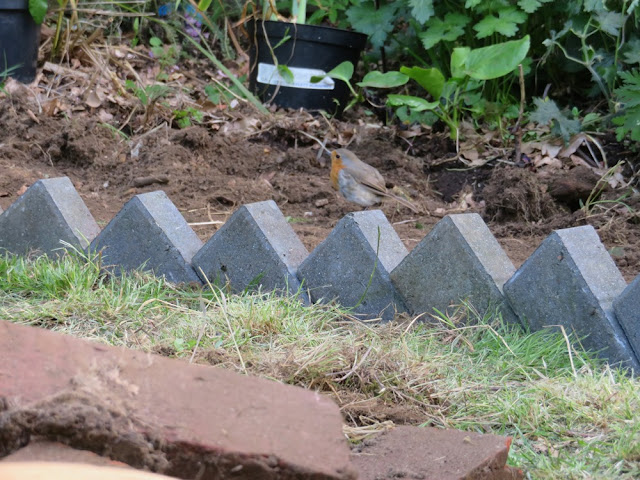 Once Paul had finished digging over the new area, I moved the block edging forward and reset it in it's new place. 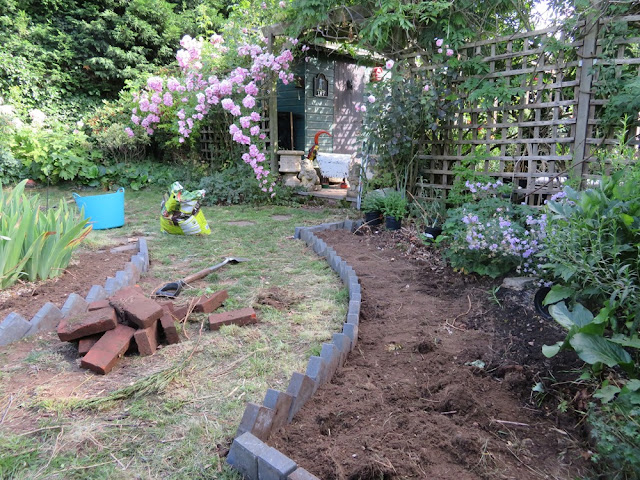 To this we added a couple of bags of topsoil we had and we dug up all the smaller plants that had been along the edge of the old border, so that they would not get over shadowed by the new plantings. 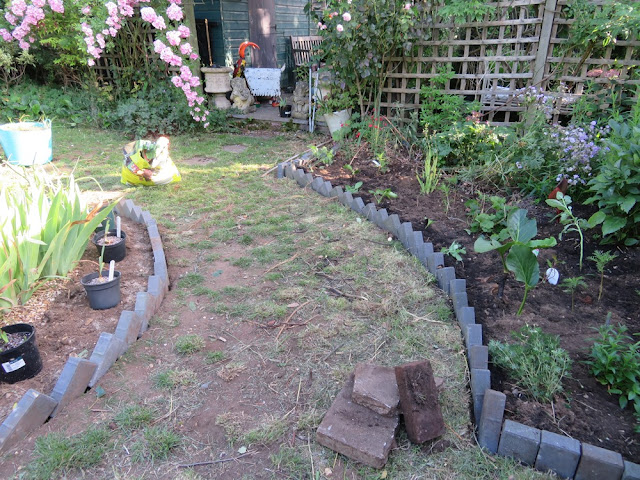 This is the border now planted up with the plants that needed moving and some others we had waiting to be put in. 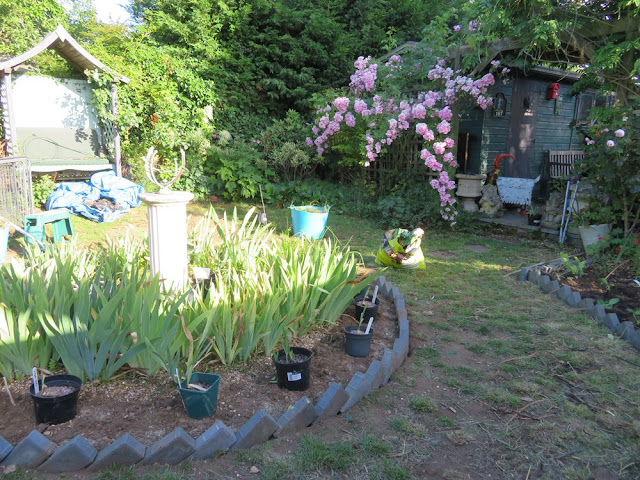 We placed half of the new irises ready to plant. 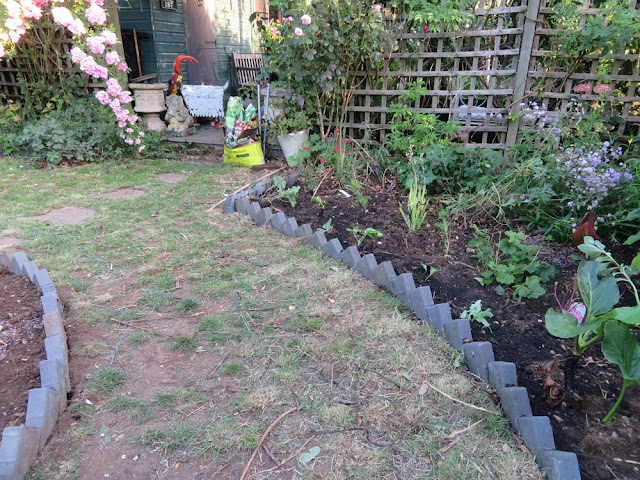 Here you can see the just around four foot of area that we will over the autumn/ winter resurface. At present the design and materials have not been decided on. 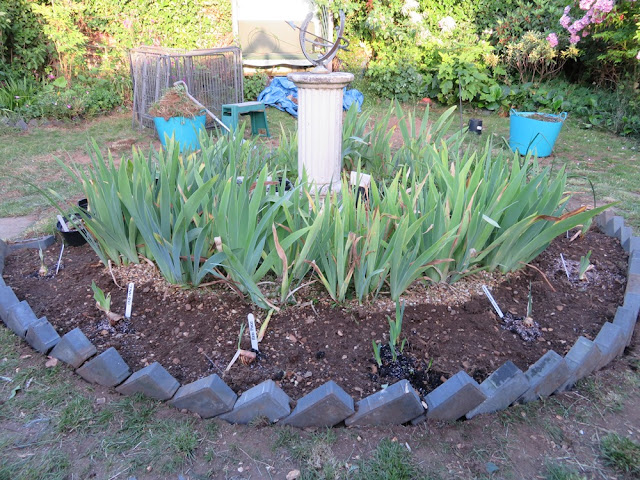 The new Irises are in on this side and just waiting for a topdressing of gravel. So a good days work today but still a lot to do.
Three more borders need to be enlarged and the second half of the circle needs completing. 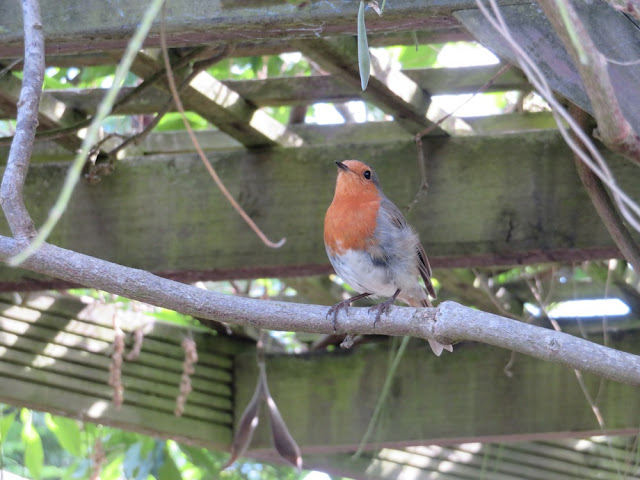 We left the Robin to check it all out while we went in for a rest and some dinner! 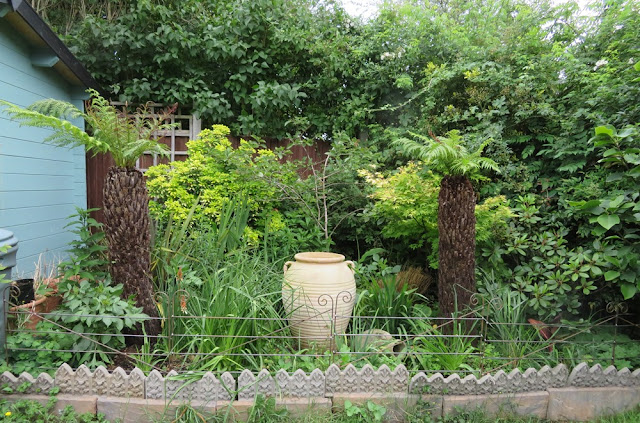 Having two large dogs, who have no idea that some parts of the garden are not meant for exploring, we have had to try and solve how to keep them off this area. But we still wanted it to look nice. So we added the wavy edging above the paving that holds the earth back. This ofcourse was not high enough to deter them.
We considered making some of the five bar style wooden fencing, but it would be in the way of seeing the garden then I found these steel five bar gate fencing which allows you to see the garden without focusing on the barrier. 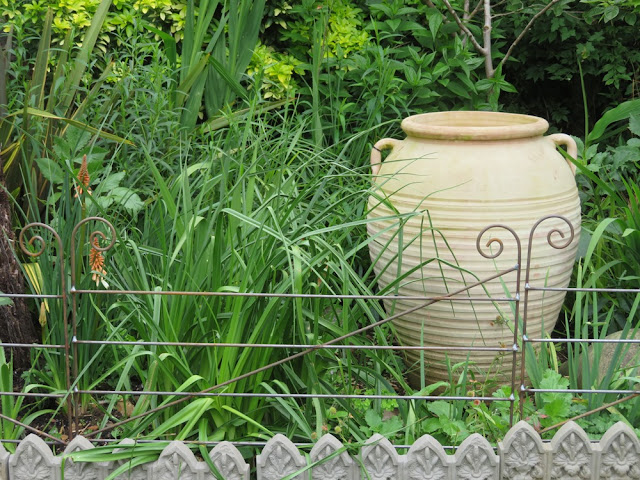 They will rust over time but last for years and I think do just what we wanted, stop the dogs from just walking onto the garden while allowing the planting to be seen fully without obstruction. 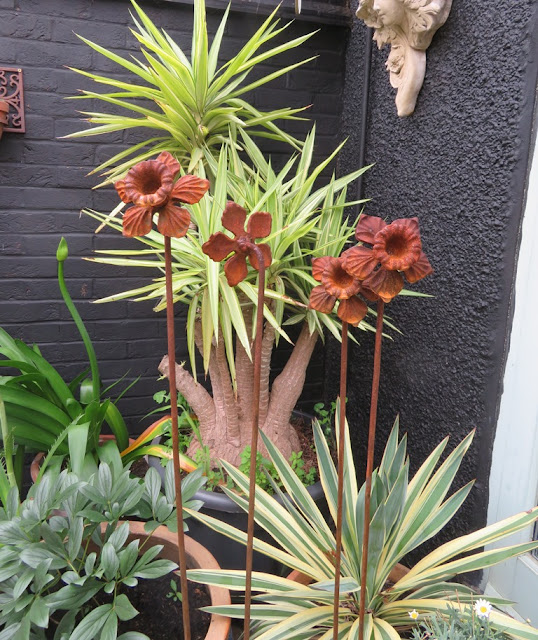 The same seller had these great Daffodil headed plant supports, so we bought four to use in the garden. 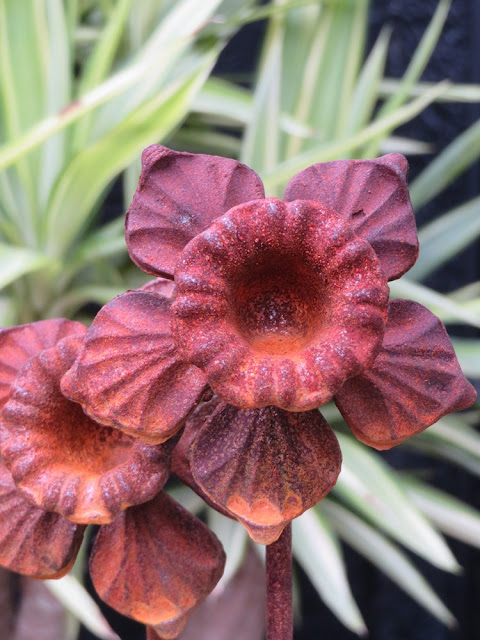 Such lovely detail and they should last for years.

Dee
Mother married to a lovely man, we have three adult daughters and one granddaughter. My interests are my family followed by my house and garden, my dolls, arts and crafts buildings, the national trust and many other things that feed the soul.